Our name LAGADO architects is based on a story and refers to an uninhibited attitude towards our profession.

We share this quality with the architect of the Grand Academy of Lagado in the story of Gullivers’ Travels, who studied how to be able to build a house starting from the top and working downward to the foundations.

This metaphor sums up our ambitions of being open minded and playful while at the same time focussed on getting our projects built and serious.

We are a serious studio for playful architecture

Founded by architects Maria Vasiloglou and Victor Verhagen in Rotterdam in 2011.

We apply our fascination with user-centered design to a diverse range of projects that share a common playfulness combined with clear geometry and latent multifunctionality.

Built work inludes public spaces like skateparks, playgrounds,  a public toilet, a shop and a restaurant as well as private homes, interiors, furniture and spatial installations.

Our services range from strategic visions to design and implementation processes. Depending on the project, we operate as initiators, researchers and architects.

This renaissance woman is not only keen on architecture and design, but also gets her hands dirty on arts, crafts and cooking. She has her own hand made knitting brand, KnitNights.

Maria Vasiloglou (1982, Greece) graduated as an architect from the Aristotle University of Thessaloniki in 2006, for which she gained several scholarships.

During these studies she did an internship in The Netherlands. Afterwards, she moved to the Netherlands and studied at TUDelft where she graduated with a second Master degree in experimental architecture from Kas Oosterhuis’ Hyperbody Lab in 2009. In 2017, Maria was nominated for the Marina van Damme Grant by the TUDelft.Maria gained working experience in Greece and in the Netherlands at Roeleveld-Sikkes, Mecanoo, BroekBakema, De Zwarte Hond and MVRDV and as a social designer for Creatief Beheer.

Growing up skateboarding the citystreets as a sponsored skateboarder planted the seed for his fascination with the potential and unintended usage of architecture.

Victor Verhagen (1982, the Netherlands) received his Bachelor in Architecture and Building Technology from Hogeschool Rotterdam in 2005.

He pursued extracurricular studies in Architecture and Experimental Design at the Southern California Institute of Architecture (SCI-arc) in Los Angeles in 2008 before graduating as an architect from the TUDelft Border Conditions Studio in 2010 with honorable mention and Archiprix nomination.Victor has worked at BroekBakema, BYTR and RoosRos and as a tutor at the Fontys Academy Master of Architecture. For the Royal Institute of Dutch Architects, he has worked as programme manager Technological Innovation.

Victor is a architect advisor for the municipality of Rotterdam and is a certified architect for the Architect Aan Zet program in Rotterdam. This shaped him into an allround architect capable of turning dreams into reality.

Lagado Architects’ playful and bold approach towards architecture, effective drawings of representation and original architectural solutions fit my values and truly inspired me to get a deeper understanding of the discipline and the industry.

In 2012, we featured in a series of video interviews and gave a talkshow for AIR startup.

ArchitectuurNL wrote about us in their November 2013 issue. Click the image to read the article in Dutch.

In 2020, we featured as selected young emerging European practice on Newgenerationsweb and Archdaily. 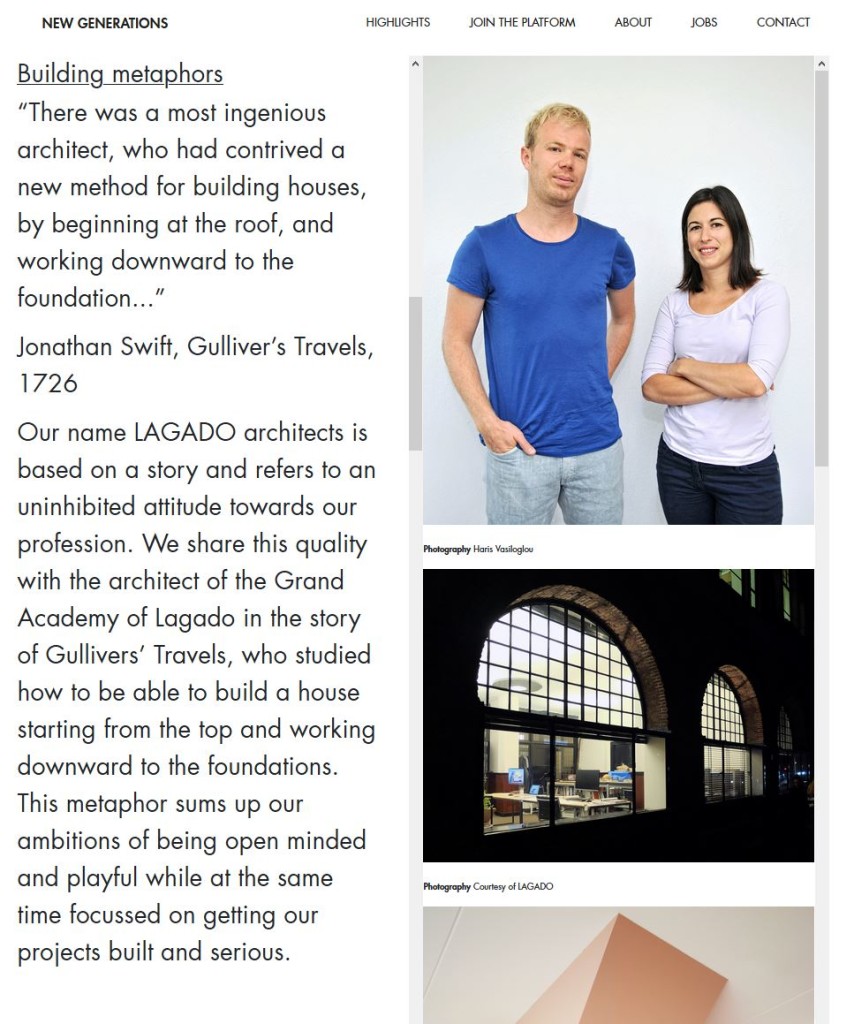 2021  Building Of The Year nomination by Archdaily for Work Home Play Home
2021   Selected to design wooden Sluisbuurt Pavillion and participate in masterclass ‘Building with Wood’ by Architectuur Lokaal and Municipality of Amsterdam, to be exhbited at Arcam
2020   Invited to participate in Mirabilia exhibition in Matera,
Italy by Antilia Gallery, a curatorial project by Profferlo
Architecture with a model that reinterprets Italo
Calvino’s Invisible Cities
2019   Invited to participate in Atlas Workshop and Speaking
Corner at New Generations Festival in Rome
2019   Selected as one of the emerging European practices by
Itinerant Office and participation in ‘Atlas of Emerging
Practices’ research and book publication
2019   Shortlisted for participation in international
competition for a skatepark and landscape park
integrated within a recycle facility, together with OpenFabric.
2019   Shortlisted for the design of a gymnastics hall,
Heijplaat, Rotterdam, together with Vlot Architecten
2018   Participation in Nacht van de Kunsten Tilburg with a
parametric pavillion designed and built by our Fontys
Master of Architecture students
2018   Participation in Next Step Program by BNA and
Synchroon at TUDelft
2017   Participation in Nacht van de Kunsten Tilburg with
Surface Symphony pavillion, designed and built by our
Fontys Master of Architecture students
2017   Selected for urban design atelier Egyptische Poort
Bladel by Architectuur Lokaal
2016   Nominated for Rotterdam Architectuur Prijs with self
initated skatepark Westblaak II
2014   Selected for participation by ZigZagCity festival
2013   Selected for Plug Rdam by Air and municipality of
Rotterdam
2013   Self initiated research on skateboarding and public
space honoured with startsubsidy by Creative
Industries Fund NL
2013   Shortlisted for Talent Development programme by
Creative Industries Fund NL
2012   Finalist Jonge Architectenprijs – competition
2012   Finalist Stadsmeubel Turnhout – competition (Belgium)
2012   Self initiated skatepool Heemraadssingel longlisted for
Van der Leeuwprijs

We are happy to work together with

We work from a studio in the monumental Henkespand,
a former genever distillery in historic Delfshaven in Rotterdam. 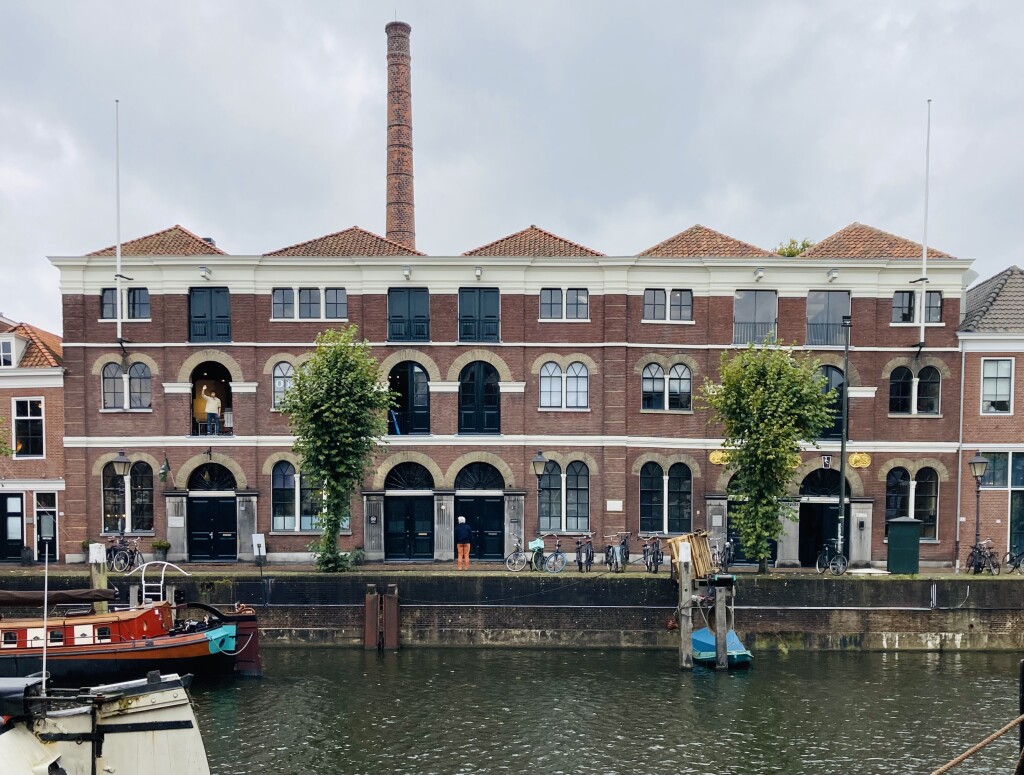